For almost all of my life, I’ve lived close to the sea. It has a special place in my heart and has always been a part of my everyday life, whether viewing out of my window or wandering along its beaches or up its piers. The last year especially, I lived in a tiny little fishing village. The sea was a stone’s throw away; the harbour visible from my window. As much as last year was cruel to me, I will very much miss being that close to the sea as now I’m living far from it. So, for today’s post I have decided to write about what it’s like to live in a tiny seaside village.

It’s almost guaranteed to be somewhere beautiful. The sea is beautiful all by itself. Small fishing harbours, cliffs, beaches – they’re pretty hard to mess up. The setting is good for the soul. As a writer, even the bad weather can be fantastically atmospheric. You know in those old films, where the wild literally howls? That actually happens. It’s easy to dismiss as creative hyperbole but there were times where I wasn’t sure if it was the wind or real voices. Between the wind and the haars—thick, rolling fog that devours everything from sight—even the bad days can really put you in the mood to write. And, if you’re a writer writing one of these dark, spooky scenes, you can take solace in knowing that this isn’t the fancy of some old, overly purple prose. Between screaming winds, consuming fogs, misty rains, and every other type of weather you can think of, there’s plenty of scope to put your characters in whatever atmosphere you need.

Even the tiniest, least touristy places are probably going to have at least one great ice cream shop. And, if you’re anything like me, if you live somewhere like this long enough then you’re probably not going to just save it for the sunny days. There’s nothing unrealistic about your character going out for ice cream in the rain.

Not always applicable if the town is more cliff than anything, but there’s a good chance you’re going to have a beach right there. Depending on what route I was taking, I’d have to walk across it to get to the shops. I skipped across stepping stones that crossed the river right where it met the sea as I walked home from dentist. Seaside towns, especially old ones, have weird layouts. 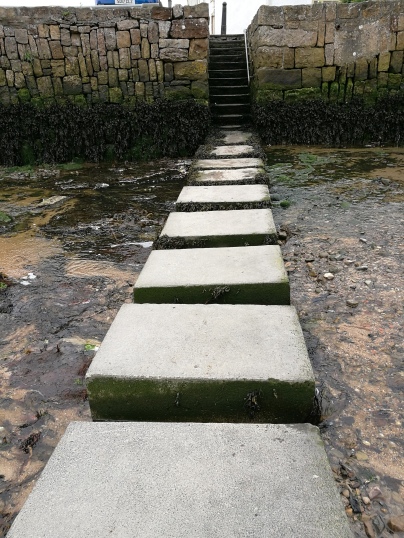 In the summer, it becomes dog central. Now, I’m actually pretty timid around dogs but I can appreciate how darn adorable they are. Where do people who can’t afford to take dogs abroad or don’t want to put them into kennels go? The seaside. If soaking in the ambience of strangers’ adorable furry friends sounds like a good time to you, get yourself to the seaside in the summertime. Want a little extra authenticity to your summer seaside scene? Dogs.

There are other critters who are here all year round. Crabs, cockles, fish, jellyfish, sea birds, non sea birds (birds don’t give a damn) – a lot of cool things hang out in and around the sea, including some things you wouldn’t expect. Most people don’t generally consider mallards to be sea birds but you’ll still find them bobbing about close to shore.

Winter sucks. And that’s speaking as someone who normally prefers winter to summer. My particular town took the full brunt of the North Sea winds, right in the face. And of course, it was an old town, full of beautiful buildings – which were all listed. That means no insulation, no double glazing, and a very unlikely chance of having decent heaters. We spent as much on heating over the winter as we did on rent, and we were still cold all the time. We lived in one room, because there was no way we could have afforded heating more than that. I couldn’t feel my toes until the end of March.

Every now and then, you’ll wake up ready to face another day, expecting to be gently rocked awake by the soft light of morning. It’ll take you a moment to realise that something is wrong. You frown, confused, and go to open the window. For some reason, you really need to get some fresh air in here. Only when you do, it gets worse. That’s right. We all know it, people are just afraid to say it. Sometimes that great majestic and mysterious body known as the sea quite simply just smells like farts. Often it’s subtle. Other times? It’s not. Just occasionally, it’s so thick you can taste it, like you’re stuck in a lift with that person. The entire town stinks and there’s nothing you can do. You’ve just gotta ride it out.

Another one that is easy to forget amongst the romantic idealistic idea of living next to the sea is that, depending on the town’s layout, there are occasions when the main road and the sea are the same thing. You’ll look out the window and think “wow, the tide’s really in toda- oh.” Good luck catching that bus! Always fun if you really just want to mess with a character’s day.

As mentioned previously, it gets busy in the summer. There’s people everywhere and they’re all in holiday mode. That means they’re walking slowly, taking up the whole pavement, and getting really confused and annoyed when someone is actually trying to hurry somewhere – the same type of people who’d probably kick a granny out of the way to get onto the train on their way to work. Anyone who lives in a holiday destination will probably know this already – people who are on holiday have the amazing ability to forget than not everyone is on holiday. Why in such a hurry, they wonder as they eat their ice cream cone. I wonder whoever sold them it, since everyone is on holiday. If your character is in a hurry in the height of summer, even if it’s getting into the evening, they’re probably going to have crowds to contend with. The town might not even have that many tourists but let me tell you, the older it is, the less it’s going to be designed to accommodate a lot of people.

This brings me to my next point. In the summer, every night is Saturday night. If your character lives between any pubs or restaurants and somewhere people might be staying, they’ll get to enjoy listening to drunks every night. Admittedly, I did have the worst of this as I lived right next to a pub. It was a poor choice.

Your character has a car? Great! They’re going to spend a lot of time swearing and/or parking really illegally. My partner and I used to have a game counting how many illegally parked cars you could spot in one place. The best we got was eleven on one corner. As you can image, this makes getting around—both on foot and by car—more tricky.

That’s right. These bastards. They sit on roofs and squak, swoop down and steal your food, sometimes they just stand in the way and refuse to move. It’s even more annoying than you’d think to walk around a stubborn seagull. Like sure, I’m probably sixty times your weight but I’ll walk around you, bird. Great.  Stories of seagulls aggressively swiping things out of your hands or just point blank ignoring you as you try to walk past it aren’t exaggerated. They’re used to people. They don’t fear you. They don’t fear your character. Not even that cold blooded assassin of yours. They’re watching. They’re waiting. And, if you’ve got a poke of chips, they’re coming for you.

2 responses to “Living By The Sea”

Current Priority:
Through the Black submissions

Rheaos was shocked, just for a moment. The pain had been too sharp for him to consider this attack, but he should have seen it coming. He’d been hit with this before.